It is with great sadness that we note the passing of Christopher Riggs, Q.C., B.A., LL.B. Christopher passed away on January 13, 2016 after a lengthy and courageous battle with cancer.

Christopher joined the firm in 1972 at its inception with Robert Hicks, Colin Morley, Fred Hamilton, Bruce Stewart, Tom Storie, and Harvey Beresford. Christopher established his reputation as one of the country’s leading labour, employment and administrative lawyers and was universally respected by his colleagues, the judiciary and opposing counsel. He was also a mentor to many of us at the firm and was a role model for generations of young lawyers, both within Hicks Morley and in the broader community.

Christopher received numerous professional distinctions. He was named a Fellow of the American College of Trial Lawyers and in 2013, he was a recipient of an honorary Doctor of Laws (honoris causa) degree from the University of Guelph.

Christopher was Managing Partner of the firm from 1994 to 2002. Through his strong leadership, Christopher was able to cement Hicks Morley’s reputation as the leading human resources law and advocacy firm in Canada. Christopher ran his practice and the firm with the highest degree of integrity, intelligence and wit and those who dealt with him came to love and respect him not only as an advocate but for his personal qualities.

We are very fortunate to have had Christopher as a member of Hicks Morley. His legacy will live forever within the firm.

He will be missed. 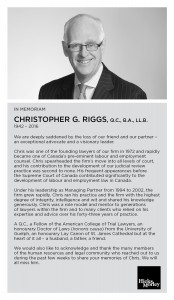