Hicks Morley is delighted to announce that Best Lawyers® has once again named Ted Kovacs “Lawyer of the Year” for Labour and Employment Law in the Hamilton area.

Only a single lawyer in each practice area and designated region is honoured as the “Lawyer of the Year,” making this accolade particularly significant. Lawyers are selected based on exceptionally impressive voting averages received during the peer review assessments.

Receiving this designation reflects the high level of respect a lawyer has earned among other leading lawyers in the same communities and the same practice areas for their abilities, their professionalism and their integrity.

In addition to the Lawyer of the Year award, Ted is listed in the 2023 edition of The Best Lawyers in Canada™ in Labour and Employment Law.

Congratulations on this achievement, Ted! 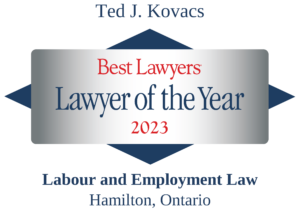