The Reduced EI Waiting Period: What Employers Need to Know

A reduction of the EI waiting period is expected to take effect January 1, 2017. Supplemental unemployment benefit and top-up plan administration will be immediately affected, and short-term disability and sick leave plans may also be impacted. Are you prepared?

As we reported in May of 2016, the 2016 federal Budget proposed a number of changes to the Employment Insurance (EI) regime, including a reduction in the waiting period that must be served before EI benefit payments begin. Most notably, the EI waiting period has been reduced from two weeks to one week by way of amendments to the Employment Insurance Act (EI Act) that are expected to come into force on January 1, 2017.

The draft amendments to the EI Regulations contemplate a transitional period of four years to allow time for SUB plans, top-up plans, sickness and STD plans to become aligned with the new rules. However, despite these transitional provisions, there will be an immediate impact on the administration of most SUB and top-up plans as of January 1, 2017. In this FTR Now, we discuss how your organization can prepare to implement these important changes.

The current EI regime requires that claimants wait two weeks before they can start receiving EI benefits. This “two-week rule” was amended in June of 2016 by Bill C-15, the Budget Implementation Act, 2016, No. 1, omnibus federal legislation implementing a number of reforms outlined in the government’s Budget. Specifically, section 208 amended the EI Act and reduced the current two-week waiting period to one-week. While this particular amendment is not yet in force, announcements made by the federal government indicate that this change will take effect January 1, 2017. Benefit periods that begin before January 1, 2017 will continue to be subject to the current two-week waiting period.

The total number of weeks of EI benefits payable will not change; claimants will simply be able to start receiving EI payments one week earlier than they do under the current rules.

The shorter waiting period will apply to all types of EI benefits – i.e. regular, special and fishing. The most commonly used special EI benefits include maternity benefits, parental benefits and sickness benefits.

We focus below on the interaction between the reduced waiting period for special benefits and the plans that many employers have in place to supplement their employees’ income for pregnancy, parental and sickness benefits. Similar issues will arise for SUB plans established for layoffs and other periods of absence during which regular EI benefits are payable.

There is a general rule that payments received by an employee from an employer while receiving EI special benefits reduce the EI benefit otherwise payable.

SUB plans (usually in place for layoff or periods of illness or injury) and top-up plans (usually in place to cover periods of leave because of pregnancy, the care of a newborn or newly adopted child or compassionate care leave) are exceptions to this general rule. The EI regime allows an employee to receive both a full EI benefit and a supplemental payment from the employer without reducing the amount of the employee’s EI benefit payment. To qualify, the employer’s SUB plan or top-up plan must meet certain conditions. One of the conditions is that the combination of the payment from the employer and the EI benefit cannot exceed a certain percentage of the employee’s normal weekly earnings. For SUB plans, EI benefits combined with the supplemental benefits cannot be more than 95% of normal weekly earnings. For top-up plans, the limit is 100% of normal weekly earnings.

SUB plans and top-up plans, including plan terms contained in collective agreements and employer policies, often contain explicit wording about the length of the EI waiting period and/or the time period during which the supplement is payable. The reduction of the EI waiting period from two weeks to one week may not align with the current SUB plan or top up plan language. Depending on how the SUB Plan or top-up plan is currently worded, employees may claim an entitlement to receive a combined payment greater than their normal weekly earnings in the second week of a leave or may receive supplemental benefits for a shorter period of time than is currently the case.

There may also be ambiguity about the amount or number of weeks of supplemental benefits due. This could occur where, for example, a maternity EI benefit top-up plan specifies that the employer will pay a specific percentage of the employee’s normal weekly earnings during the first two weeks of the leave without reference to an offset for EI benefits received during that period, or where a parental top-up plan comes into effect after a 17-week pregnancy benefit period (two-week waiting period plus 15 weeks of EI maternity benefits), leaving the employee without a supplement for the 17th week.

The charts below illustrate typical entitlement for maternity leave under a top-up plan, and how a reduced waiting period will create potential periods of ambiguity or overlap with respect to entitlement, which must be addressed: 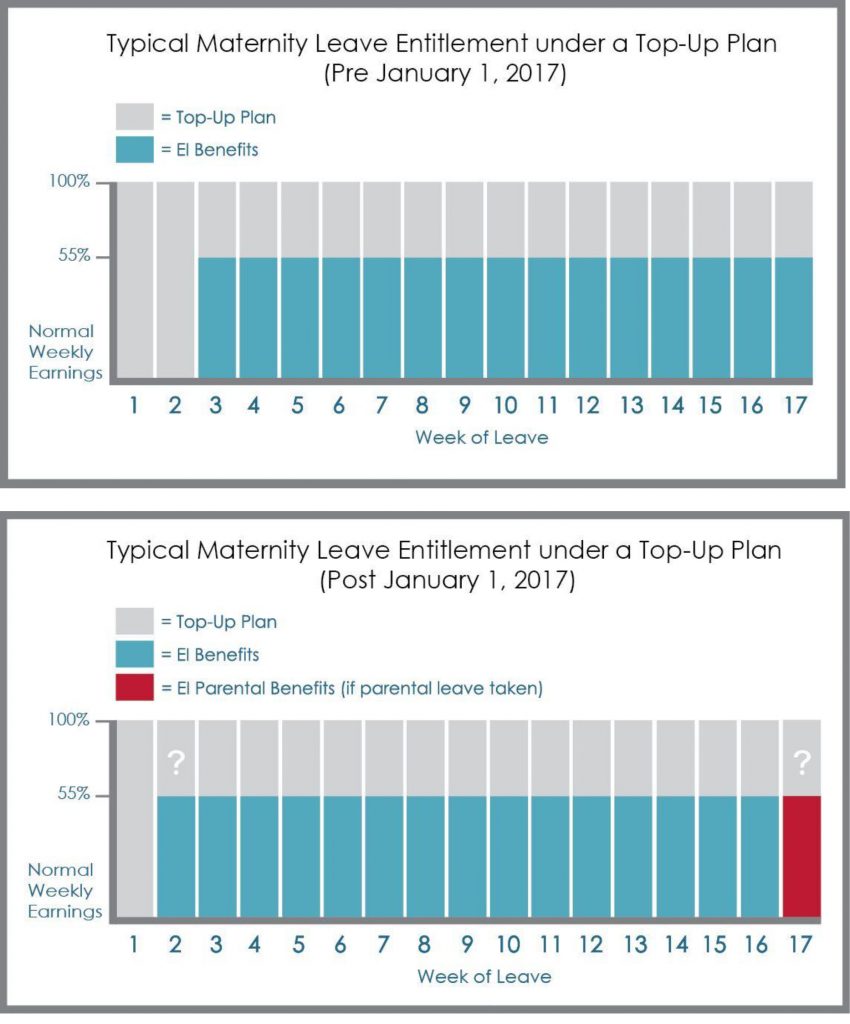 As explained below, the draft EI Regulations contain a four-year transition period that would allow EI benefits and supplemental benefits to exceed the normal SUB plan and top-up plan limits on combined benefits in the week immediately following the waiting period, without resulting in a reduction to the employee’s EI benefits. Notably, this transition rule does not require higher supplementary benefit payments than the SUB or top-up plan otherwise provides and does not correct for the concern that the plan terms may result in the supplemental benefits being payable for one fewer week than is currently the case.

Employers will need to consider how the shorter waiting period impacts the design and entitlements of its employees and how best to amend the plan terms or to administer the plan to provide the intended level of income support until an amendment can be made effective.

The reduction of the EI waiting period from two weeks to one week also impacts the EI Premium Reduction Program (PRP). The PRP permits employers to use a lower EI premium rate when the employer provides a STD or sick leave plan that meets specific requirements set out in the EI Regulations. The PRP is a voluntary program designed to recognize the savings to the EI Operating Account resulting from the employer paying sickness benefits for the first number of weeks of an employee’s illness or disability. These plans create savings since the employer’s plan becomes the first payor and fewer EI sickness benefit claims or EI sickness benefit claims of shorter duration are made. Employers must submit their STD or sick leave plan for the approval of Service Canada in order to obtain the lower EI premium rate (5/12 of which must be shared with employees in a manner consistent with the EI Regulations).

Employers will want to weigh the savings resulting from lower EI premium rate available under the PRP against the expected additional cost of changing their STD or sick leave plan to commence benefit entitlements one week earlier. Changes to the STD or sick leave plan may also have implications for the employer’s LTD plan eligibility or benefit period.

Given the complications that may flow from the reduction in the EI waiting period for employers with SUB or top-up plans, or who currently qualify for the PRP, the draft amendments to the EI Regulations outline a four-year transition period for plans already in place prior to January 1, 2017. In particular, the transition period is designed to assist employers with plans incorporated into collective agreements or third party insurance contracts by providing time to consider the changes and, where applicable, to amend their plans.

The proposed transition period will allow SUB plans to temporarily make a supplemental payment that, when added to the claimant’s EI benefit, exceeds 95% of weekly earnings in the week following the one-week waiting period. Similarly, top-up plans will be able to make a payment in the second week of the absence that, when combined with the employee’s EI benefit, exceeds 100% of normal weekly earnings.

The transition period further provides employers with time to amend their STD or sick leave plans to reflect the reduction of the maximum elimination period from 14 days to a maximum of seven days, in order to qualify for the an EI premium reduction.

The transition period will end on January 3, 2021, and all plans will need to comply with the amended rules by that date in order to continue qualifying for special treatment under the EI Act.

Employers should take steps now to review their STD and sick leave plans, their top-up plans and their SUB plans, as well as their collective agreements, in order to:

If the plans are collectively bargained, employers will also need to determine whether the plans may be unilaterally amended and if not, to develop a strategy around the employer’s intended response to the waiting period reduction.

Should you have any questions or require further information, please contact any member of our Pension, Benefits and Executive Compensation group or your regular Hicks Morley lawyer.