Hicks Morley has been ranked in Chambers Canada 2017 in the areas of Employment & Labour, Nationwide – Canada and Ontario and Pensions & Benefits, Nationwide – Canada.  Stephen Shamie is commended for his ability to deal with sophisticated labour relations issues and is described as “knowledgeable and highly regarded.” Henry Dinsdale is regarded as a “go-to labour and employment lawyer” with extensive experience representing employers in collective bargaining and union certification matters. 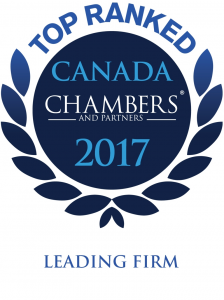