Setting up Shop in Canada? What U.S. Employers Need to Know About Canadian Human Rights Law

While Canada and the United States are alike in many respects, there are a few key differences in human rights law that U.S. employers should be aware of if you are considering buying, selling or operating a business in Canada.

“Anti-discrimination” law in the United States is known as “human rights” law in Canada. All jurisdictions in Canada have enacted human rights legislation which may vary in some aspects but which share fundamental characteristics. In this article, we highlight four key features of Canadian human rights law that may be of interest to U.S. employers. 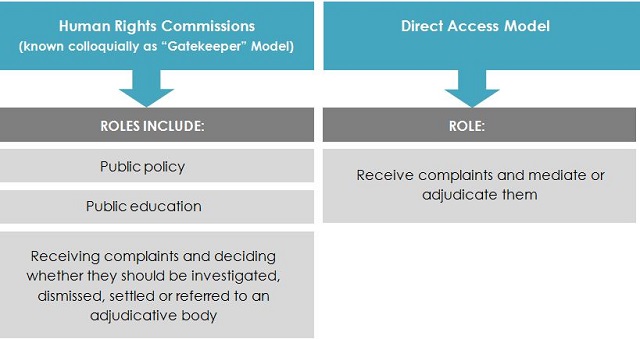 The Human Rights Commissions are often referred to as the “Gatekeeper Model” because they determine which complaints shall, or shall not, proceed to adjudication. This model is utilized in all but two provinces and one territory.

The Direct Access Model exists only in British Columbia, Ontario and Nunavut. Complaints are submitted directed to the adjudicative body without the intermediary of a commission.

Ontario moved from the Gatekeeper Model to the Direct Access Model in 2008. The Human Rights Tribunal of Ontario receives complaints directly and has established its own processes and procedures to mediate or adjudicate claims. The Human Rights Commission remains in place but its primary focus is now on promoting compliance with the Human Rights Code through, for example, public education and policy development.

There may be various exceptions to these time limits depending on the circumstances of the alleged contravention.

Other grounds may vary depending on the jurisdiction. For example, several jurisdictions prohibit discrimination based on gender identity/gender expression. Some provinces include source of income as a grounds of discrimination, and some protect political beliefs.

Significantly, there is both a substantive and a procedural aspect to the duty to accommodate and both can result in a remedy of financial damages.

A current “hot topic” in the human rights area is accommodation of “family status,” a prohibited ground of discrimination across Canada. Courts and adjudicators interpret this term liberally and it has been found to apply to both childcare and eldercare. For example, employers have been held in breach of their accommodation duties where:

The test for family status accommodation continues to evolve, and prudent employers adopt best practices when considering individual requests for such accommodation.

Human rights protection applies not only in the employment context but extends to service providers as well as to independent contractors.

For example, a breach of the Ontario Human Rights Code has been found where:

Whether you are buying, selling or operating a business in Canada, Hicks Morley can help.